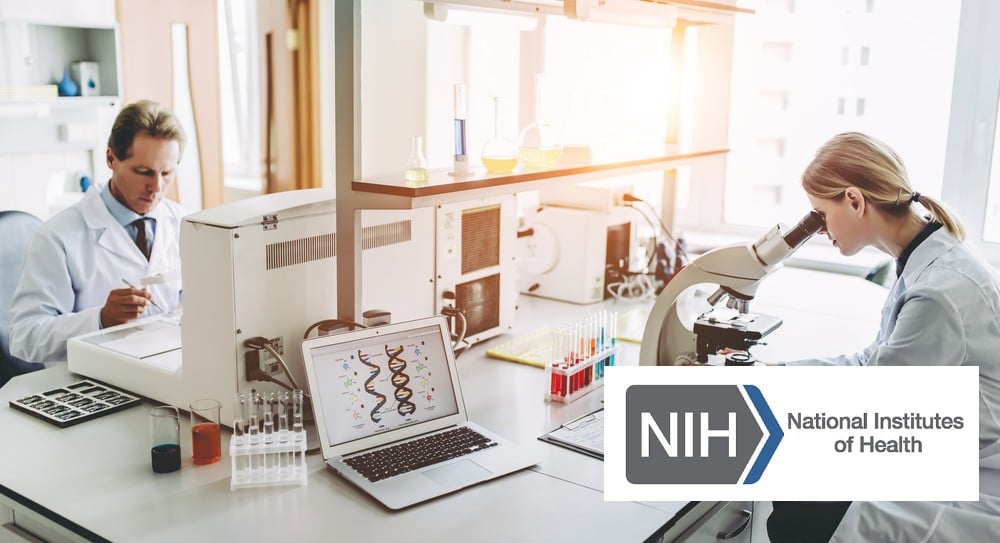 A Computational Approach to Curbing Chemotherapy’s Side Effects

Chemotherapy can be an effective treatment for cancer, but it often comes with unpleasant side effects like nausea, vomiting, and diarrhea. Now, researchers think they may have found a way to reduce those side effects by targeting the gut microbiome.

The human gut is home to trillions of microbes, including many different species of bacteria. Some of these bacteria produce an enzyme called beta-glucuronidase that can remove a sugar molecule from chemotherapy medications, making them more active and thus more likely to cause side effects.

A cutting-edge computational technique was used in a new IRP research by Min Shen, Ph.D. who leads the Informatics group in the Division of Preclinical Innovation at NIH’s National Center for Advancing Translational Sciences (NCATS) to help identify compounds that target one of those bacterial molecules, which might lead to the development of anti-tumor medications that alleviate some chemotherapy side effects.

“Many people can’t tolerate the side effects and can’t complete the full course of their chemotherapy,” says Min Shen, Ph.D., “Normally, chemotherapy will be administered multiple times, but many people quit in the middle.”

That is why Dr. Shen’s team is attempting to discover chemicals that can stop bacterial beta-glucuronidase enzymes, which exacerbate chemotherapy’s negative effects. Her team screened more than 400,000 molecules using the computational technique and found 69 molecules that inhibited beta-glucuronidase and 13 that were very effective.

One of the chemicals discovered by Dr. Shen’s research may be developed into a drug to treat digestive issues caused by chemotherapy treatments. However, before this can happen, Dr. Shen’s team must conduct additional research as well as collaborate with chemists at NCATS to change the chemicals for better drug efficacy.

Mosquito-borne viruses classified as potential biological warfare agents include western (WEEV), eastern (EEEV), and Venezuelan (VEEV) equine encephalitis viruses, which are viral diseases that may be spread by mosquitoes. Infection with any of these viruses can cause flu-like symptoms and even severe neurological damage or death in humans.

The WEEV, EEEV, and VEEV viruses are all classified as potential biological warfare agents due to their ability to be transferred by aerosol droplets under specific lab conditions. There is currently no vaccine or treatment available for any of these diseases, but a recent clinical trial sponsored and funded by the National Institute of Health (NIAID) has shown that a new vaccine is safe and well-tolerated.

Scientists at the NIAID Vaccine Research Center (VRC) part of the National Institutes of Health, created a virus-like particle (VLP) vaccine candidate (abbreviated WEVEE) that incorporates proteins from the EEE, WEE, and VEE viruses’ outer shells to stimulate an immune response. This response is similar to the one that would be elicited by the actual viruses but does not contain infectious material and thus poses no risk of infection.

The VRC researchers conducted a Phase I clinical trial in which 30 adult volunteers were given an initial dose of the VEVEE vaccine and a booster of the same dose 8 weeks later.  The study found that the vaccine was safe and well-tolerated with no serious adverse events reported. The participants also showed the development of EEEV, WEEV, and VEEV-specific neutralizing antibodies in their blood.

This is encouraging news and supports further clinical evaluation for the development of a potential vaccine to protect against these viruses, which have no current prevention or treatment options available.

The NIAID has granted Emergent BioSolutions, a life-sciences firm located in Gaithersburg, Maryland, a commercialization license for the advanced study of the WEVEE vaccine candidate.

A new study funded by the NEI Intramural Research Program and conducted by researchers from The National Eye Institute (NEI) used artificial intelligence (AI) to assess RPE cell morphometry, the external form, and the size of each cell. The Retinal Pigment Epithelium (RPE) is a layer of cells that support the function of photoreceptors, the light-sensitive cells responsible for vision.

They trained a computer to examine the entire human RPE monolayer from nine cadaver donors with no history of significant eye disease by feeding it fluorescently labeled pictures of RPE. They discovered five distinct RPE cell subpopulations, dubbed P1-P5, positioned in concentric circles around the fovea, the light-sensitive center of the macula, and the retina’s most sensitive region. Foveal RPE are typically perfectly hexagonal and compactly positioned, with more neighboring cells than peripheral RPE.

“These results provide a first-of-its-kind framework for understanding different RPE cell subpopulations and their vulnerability to retinal diseases, and for developing targeted therapies to treat them,” said Michael F. Chiang, M.D., director of the NEI, part of the National Institutes of Health.

They were surprised to find that the peripheral retina contains a ring of RPE cells (P4) with a cell area comparable to that of RPE in and around the macula.

“The presence of the P4 subpopulation highlights the diversity within retinal periphery, suggesting that there could be functional differences among RPE that we are currently unaware of,” said the study’s first author, Davide Ortolan, Ph.D. a research fellow in the NEI Ocular and Stem Cell Translational Research Section.

To further test the hypothesis that various retinal diseases affect specific RPE subpopulations, they examined ultrawide-field fundus autofluorescence images from persons with choroideremia, L-ORD, or a retinal degeneration for which no molecular cause was identified. Although this research was conducted in a single setting at one point in time, it showed that various RPE subpopulations are susceptible to different types of retinal degenerative diseases.

“Overall, the results suggest that AI can detect changes of RPE cell morphometry prior to the development of visibly apparent degeneration,” said Ortolan.

Some RPE subpopulations may show age-related morphometric changes before others. These findings will aid future research utilizing noninvasive imaging technologies, such as adaptive optics, which image retinal cells at much greater resolution and might be used to predict changes in RPE health in living patients.

The growth mechanism in prostate cancer is simple compared to other types of cancer. The androgen receptor, a cellular protein that testosterone must bind to function, is required for prostate cancer cells.

However, prostate cancer has proved difficult to treat because it frequently develops resistance to androgen deprivation therapy. The therapy may initially shrink the tumors, but they will eventually resurgence, at which time there is little that can be done.

David Takeda, M.D., Ph.D., a researcher at the Intramural Research Program (IRP), is developing a new strategy to treat cancer that relies on epigenetic manipulation. He thinks that changing epigenetics may provide an effective new approach to treatment.

Dr. Takeda is now working to study further his discovery conducted at the Dana-Farber Cancer Institute in Boston, Massachusetts, which showed that shutting down the regulatory region in prostate cancer cells (enhancer) slows down cancer growth.

“Can you tell a cancer cell what to do?” wonders Dr. Takeda. “It would be really cool if you could program a cancer cell to do something. You could dictate its identity epigenetically, and maybe you could change it to a state that’s amenable to treatment or a state where it doesn’t grow, but we don’t yet know if that’s possible.”

“That’s kind of what NIH is for: to try out these big ideas to see if they could possibly work,” he continues. “If it turns out to not work, at least we thought big.”

Dr. David Takeda is a Lasker Clinical Research Scholar and the director of the Functional Genomics Section in the Laboratory of Genitourinary Pathogenesis at the National Cancer Institute (NCI).

The Center for Cancer Research (CCR) was founded to educate and empower the entire cancer research community by making essential discoveries in basic and clinical cancer research and developing them into innovative treatments for individuals afflicted with cancer or infected with HIV. To learn more about the Center for Cancer Research, visit their website.

Viruses on the Brain

Viruses may cause long-term damage to the brain, even when a person is not actively sick.

Dr. Avindra Nath is the Clinical Director at the National Institute of Neurological Disorders and Stroke (NINDS) and the head of its Section of Infections of the Nervous System. His lab focuses on understanding the pathophysiology of retroviral infections of the nervous system and the development of new diagnostic and therapeutic approaches for these diseases.

Dr. Nath’s team has discovered a protein in the brains of HIV-positive patients, even when antiretroviral therapy has reduced the amount of HIV in their blood to undetectable levels. The team’s work has also suggested that this protein, known as Tat, could be responsible for the neurological problems seen in some HIV-positive patients. He believes that HIV lives in brain cells and is unaffected by antiretroviral medications, continuing to produce Tat and causing brain inflammation and neuron death.

Dr. Nath and his team are working on creating single-stranded, DNA-like molecules called antisense oligonucleotide that can target and silence the gene that encodes Tat. The lab is also studying ‘checkpoint inhibitors, drugs that have recently been used in cancer immunotherapy.

“The common thread among all of these illnesses is their under-recognized effects on the brain,” Dr. Nath says. “What happens with most pandemics and viral infections is that people get focused on the effects on the organ system that causes the acute symptoms,” he says. “If patients forget things or are not behaving normally, their doctors just blame some other explanation for it rather than thinking that the disease itself might be the cause.”

Similarly, they have found evidence of brain damage in deceased COVID-19 patients, suggesting that the virus can cause long-term problems even after a person has recovered from the acute illness.

Discoveries like those being conducted in Dr. Nath’s lab have the potential to revolutionize how viral infections are treated long-term.

“You have to be very careful,” he says. “People who had COVID-19, this serious respiratory illness, are also complaining of neurological symptoms, and these symptoms may actually be persistent. We have to pay attention to this and not ignore it.”

Advancing Research on Emotional Well-Being and Regulation of Eating

Irreducible Subjects: Disability and Genomics in the Past, Present and Future